I have not posted here for half a year now as I was unsure if I wanted to continue with the blog given my lack of wargaming and for some time it had been posting mostly just another painted unit similar to the one before and the one before that etc. However now I am actually painting up quite a few other items just for pleasure I think the blog still has some life in it. I will still do the occasional unit but for the most part it will be showcasing either my busts or diorama's. I will do some backward posts but mostly I will be posting new finishes. Not having loads of spare space I will be offering my work for sale. 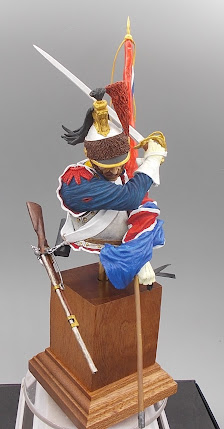 The bust is supplied by CGS Military Figures as a high quality and detailed bust. They also do the option as full figure mounted on his horse, a very impressive looking model. It comes in just under 20 pieces that mostly have to painted before assembly. 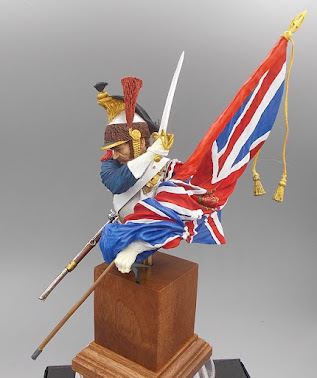 The standard was captured from the 2nd Battalion 69th Regiment (South Lincolnshire) of Foot at the battle of Quatre Bras. It was quite a challenge painting the Union that was just attached to the arm and was difficult to hold without rubbing the paint off. Good job I have a good supply of rubber gloves! 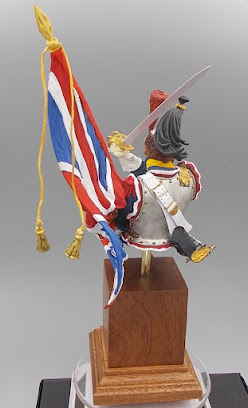 Keeping with the flag I exchanged the wire that comes with the kit for embroidery thread, painted it gold and soaked in glue adding the resin tassels once it was dry. I think it actually is a better finish. 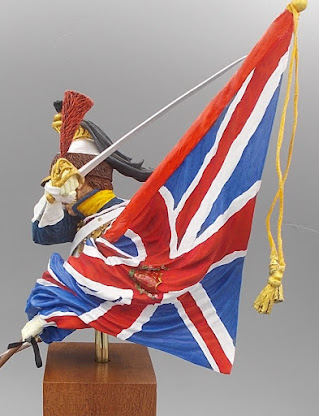 I used mostly Andrea Color paints but also a fair few Vallejo. I have started to build up a fair collection of Andrea paints with nine sets of six complimenting sets and their higher pigment concentration and the system of using them has really improved my standard of finish. I also used oils on the carbine to get a good woodgrain finish. 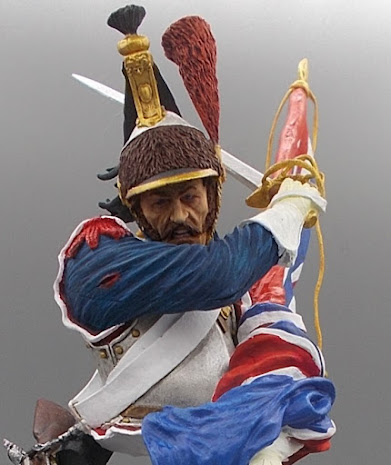 Next bust will be Napoleonic French cavalry again, this time a Hussar officer making use of a very generous present from Dave D, Scale 75 Green Colour set. Before that though I hope to finish my first 1/35 scale dio based around a bren carrier.