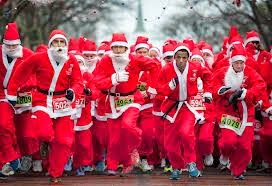 The Secret Santa for 2014 closes on Sunday 19th October so this is the last chance to join in the fun and Guarantee getting a wargames present from someone who takes the hobby as serious as you do.

We have 29 taking part this year and as each year has seen an increase in participants I feel this is now here to stay. What makes it great for me is that Cath my wife really enjoys running it and this allows me to play as well.

If you want in just leave a comment here letting me know and send me an email by the widget at the top of my page. You will be committing to send and receive a present of about £15 plus postage or equivalent value for those not buying in the UK. It has to be wargames related and can come from a list, idea from reading their blog (if they have one) or something you think they will really want.

I have started work on my Santa Clause present and it's really fun to be working on something for another gamer so thanks to Chris for running the other version of Christmas wargames fun.

Thursday just gone saw me head over to Kev's to play a Hail Caesar game with Kev's superb 1/72 figures. I was on Kev's side with the Celts facing Glen and Andrew (Loki) I have been invited over a few times but this was the first time I was able to make it and was somewhat taken back by how close it was to work. As in 15 minutes from work! This of course will make it extremely easy to get over for future games.

Kev has a great set up and Charlie is a very understanding and cool wife and the night was very relaxed and full of laughter. I knew they had not so very long ago jettisoned one of the players for failing to follow the ten commandments so obviously I did not want to disappoint and honestly they were so laid back it was a breeze to play with them. Yes we had a number of rule questions but all were sorted in a friendly way of players very at ease with each other.

Being my first game of Hail Caesar I was really interested in it's mechanics and feel. I also know it's Marmite in it's play, you either really like it or really don't! For me I can see why they play the rules, your going to get a game in an evening and it has a nice feel to it. Even though it's I go you go the command rules are slick enough that this by no means makes moving a forgone conclusion and that's the main Marmite issue. We have a similar rule in the Napoleonic rules so I was at home with the concept. 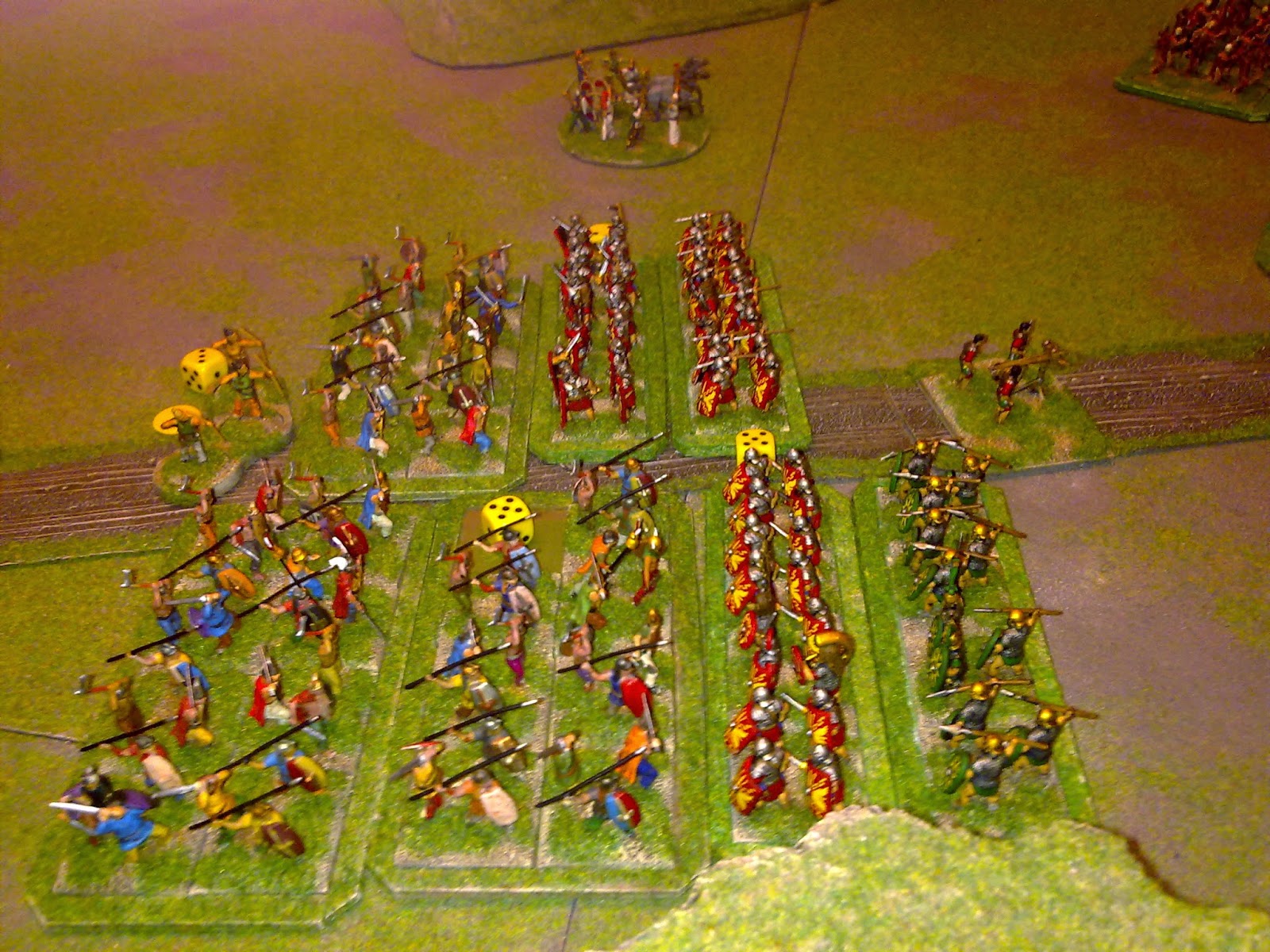 I forgot to take many pictures and these were on my phone so not the best but here you can see my warbands trying to stand up to the Roman's. I really liked how the rules work in the special Roman abilities and I can tell you hitting them face on and not killing them in the first round is not the best way of dealing with them. 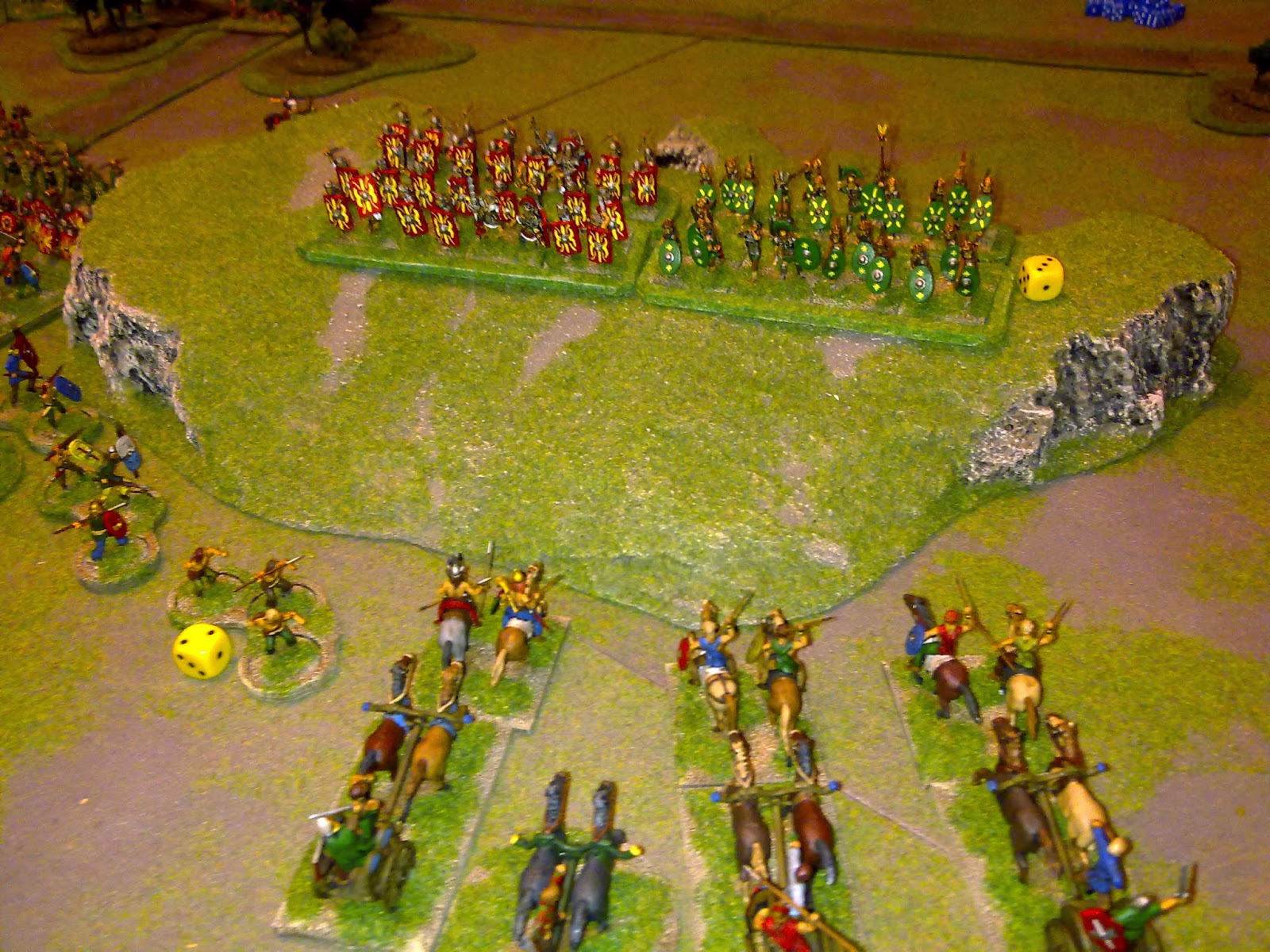 I also had some light cavalry and chariots these should have made the top of the hill before the Romans but the dice, the dice. So instead I was happy to pelt the Auxiliaries from a distance which was wearing them down, these are easier to harm than the Legionnaires. 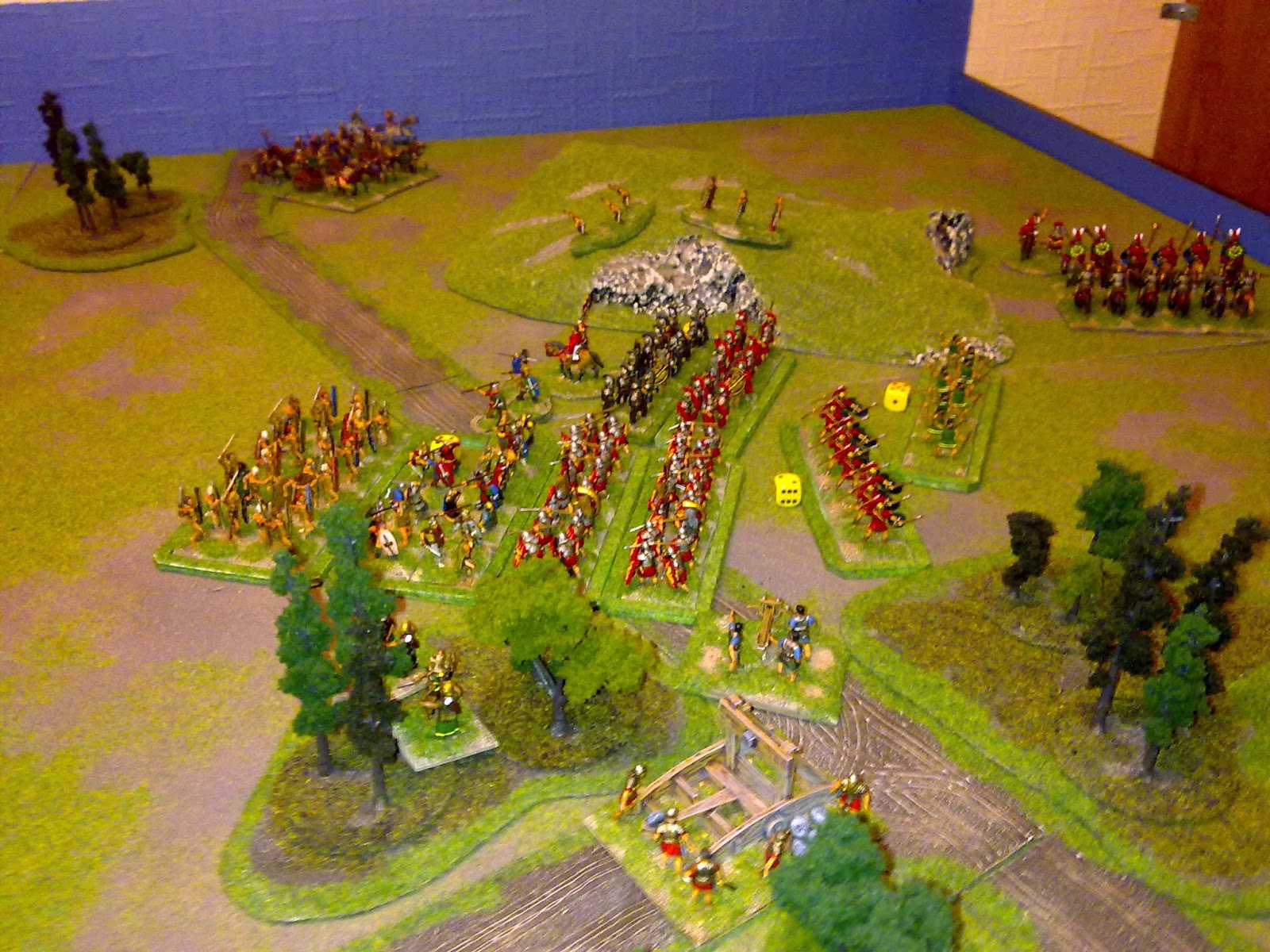 Kev had relied on my covering his flank but this turned out a bad move as I failed to move for two turns allowing Glen to crash into Kev's open flank and drive off the field two warbands and this was to be a major loss for us as the numbers were on the Roman side and whilst I was to get involved with Glen's force Andy was able to send all his troops against Kev with me unable to get troops across to help out. Kev against the odds won two rounds of combat but Andrew saved liek the best of them and as the casualties built up Kev was getting close to losing the rest of his infantry.

I was doing worse and soon all my infantry had been routed from the field whilst my cavalry slowly retreated from the victorious Romans. Kev tried to salvage some honour by standing against the Roman cavalry with his but even that was not to be and a total rout was achieved.

So a fun game that were no opportunity to ridicule an opponent was missed or ally for that matter. From that one game I think I may have the rules for the 6mm Ancients project and I have started to look for rules (one of the commandments LOL) and I can see once the Waterloo Project is finished I will be painting up a few other side projects such as a few boxes of Hoplites or something similar. I also have some 20mm SHQ WWII American Paratroops which may see the light of day on the painting desk.

A fun night that I look forward to doing again at some time in the not too distant though not for a few weeks as I have other wargame and work commitments that will keep me from the Cabin. A big thanks to the guys, Charlie and Bilbo for not eating me alive.
Posted by Ian at 20:47