I stumbled on this Zombie bust just the other day on Facebook. These are produced by Steve an independent sculptor and Commission Painter. At the moment he just has a bust called The Beast Handler but he also does limited run busts like this Zombie. Originally limited to about 20 models he has reduced the run still further to 15 and just has a couple left. 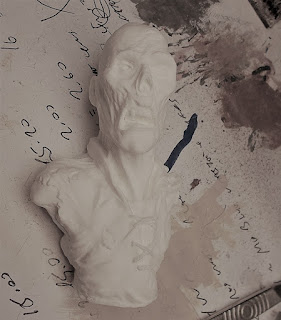 The cost is £18 plus postage and represents excellent value and I thought well worth a punt. Steve has real fast turnaround and I received the figure today after supplying my address on Monday evening!! 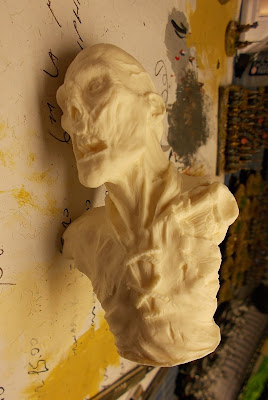 The finish is white, but this image gives a better idea of the detail which is very clear. I have already started work on the sculpt and I have to say I am more impressed than I thought was possible. This is quite a diversion for me but one I am really enjoying. So thanks Steve, top marks so far.

These are the first figures finished post challenge that was not actually started during the challenge. I don't even know the supplier of the figures as these were given to me by a friend years and years ago now. I ended up just doing a very basic paint job on them but they look OK on the table. 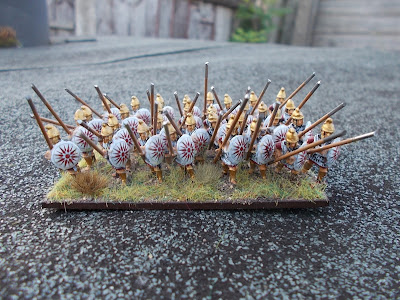 All but sixteen of the figures needed the pikes adding which was OK as I have plenty of wire to snip and glue in place. These continue with the plan of putting all the figures on a single base for use with Hail Caesar which will make it far easier to move them around the table. 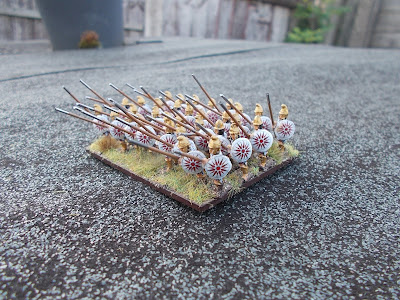 The shields have Little Big Man transfers on them costing £3.50 per sheet. I needed two sheets but that leaves me with enough spares to do a third unit which I will do at some point. Very fast service and low cost postage means I will be happy to use again.

The transfers went on with ease though I really need to improve on my placement as you can see from the photo's. 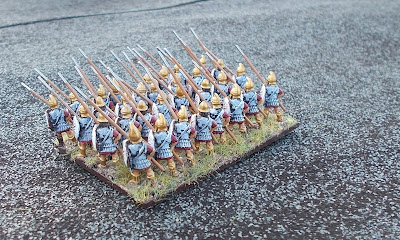 This unit has a mix of different helmets which with the varied positions of the pikes make them look a bit more interesting. 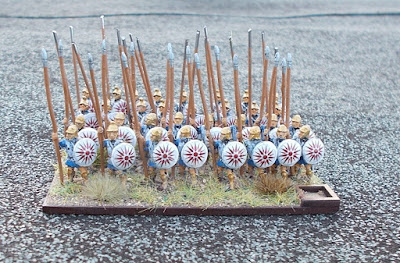 The second block has two different makes of figure and I have put the ones with cast pikes to the front as their shields are domed whilst the rear ranks have flat faced shields. The front rank could possibly be Essex but that is a guess. 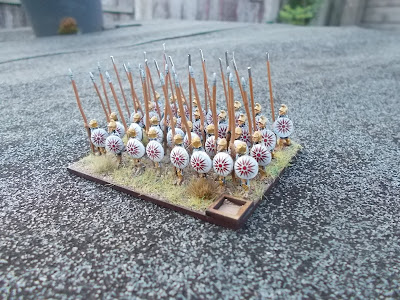 With these two blocks I now have about three blocks more than I need. However as I have far more Persians than you would expect to see in a game it's possible for my extra blocks to be used in a monster game sometime. Of course I can always use more pike in a game and cut back on other troops. 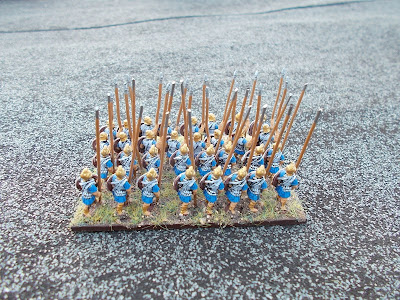 With Joy of Six just around the corner I am starting to feel the need to make good progress on our display game for next year. As such I have the Cataphract's  on the painting table at the moment. I plan to get them done before the end of the month and either move onto some SYW or keep on  with the Ancients and get the five phalanx units I have in stock painted. I still need to buy more of these as well as plenty more figures before I have all the units required. With over 4600 unpainted figures in hand I am not exactly short of stock, just seems I have the wrong figures at the moment.
Posted by Ian at 09:20 14 comments:

Over a month between posts! Well whilst painting has been on an all time low I have been playing games, just not recording them. Hopefully I will get back to normal and get posting again. I have a Saga game this week and a Black Powder game the week after if all goes well. I have even started to paint more regularly again with a couple of 15mm units finished this week just waiting to be photographed.

I have had a few games of Hail Caesar with Matt recently and another with Lee. My Persians have not done too badly so maybe I am starting to use them correctly? Probably the dice have had more to do with it with two games having molten dice. This then is the other game played against Matt.

The thing about the Persians is you get a lot for your money. A lot of low cost units that is. In the distance you can see the Han whilst I have enough troops to wrap round them if the terrain would allow. 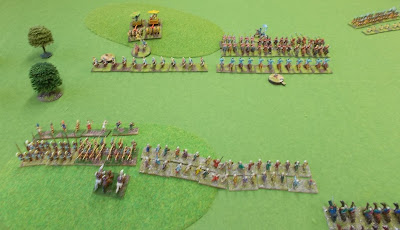 On my left flank I send in hoplites and two units of levy bow infantry. These are facing Matts only mounted force so have to be careful, I do have one of three mounted brigades just to the left in the photo that should help some. 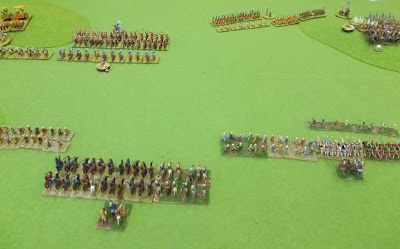 Only trouble being that they don't much like moving forward. Matt and his group have developed a few changes to the basic activation rules giving a bonus for units and formations over a certain distance. This usually means whilst at distance you can get a few moves a turn. 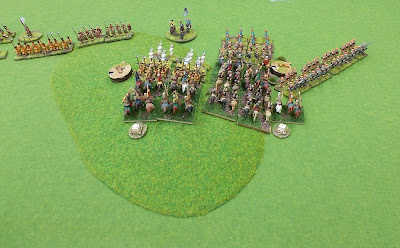 On the opposite flank I charge my cavalry into Chinese infantry. In Black Powder crossbows have a few restrictions and other bonus abilities a definite disadvantage is the inability to use closing fire. As such I charged some cavalry units in his infantry on his flank. This is risky as a roll of 6 can cause you a MC that low rolls can cause some nasty effects. Also the cavalry have a 50/50 chance of becoming disordered, in this case I got lucky. 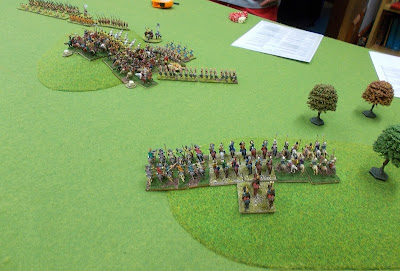 I still had another cavalry division waiting the results of the first attack before being unleashed for a clean up attack. Or they failed to get any moves!! 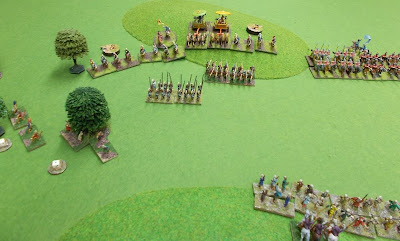 Back on the other flank I try to bring the Chinese chariots into melee but Matt keeps dropping them back to allow his bow armed crews to cause casualties but I have good save rolls allowing them to continue to march forwards in the hope of finally catching them. 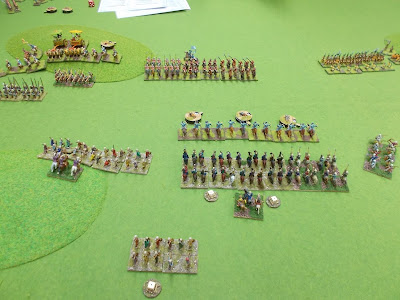 Matt sent his bow armed light cavalry up to my right hand cavalry division in an attempt to get me to charge and in the meantime push up my casualties. This was partially successful but my cavalry are armed with javelins so it's not all one way traffic. 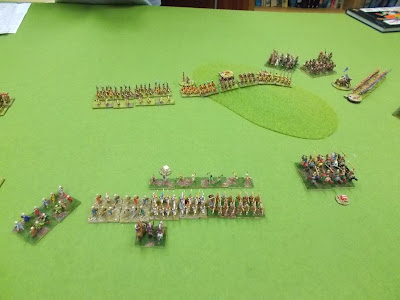 The centre was for the most part rather quite as I struggled to move forward. My right hand cavalry has come back from a bruising round or two of melee and needs time to get sorted out. 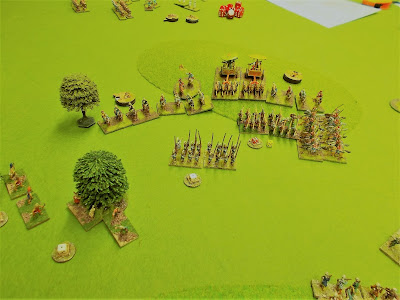 Disaster for my hoplites as Matt gets a open flank to charge. He went on to destroy these and move on to the second unit destroying those as well. The first time Matt can remember such good fortune for his cavalry. 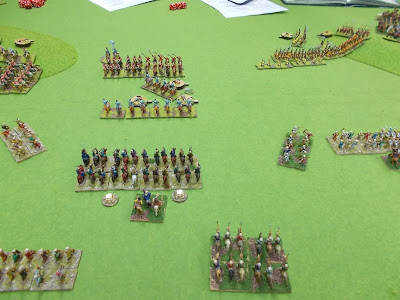 However in the middle I had the advantage and was just starting to force the two wings of his army apart. 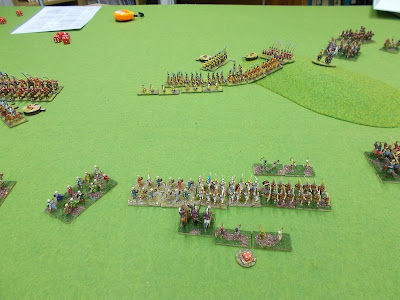 On my right I had broken some units and now can both more troops most of which were in great shape and the ability to strike from a distance. 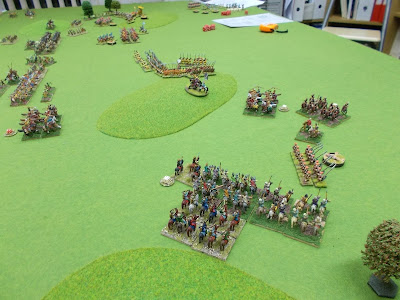 One of Matt's brigades on my right was broken and a second flanked and bent back. All the mounted units are mine in the image above with one retreating Chinese unit in the middle. My task here was to get the most forward cavalry behind the Chinese cutting off their retreat whilst bringing the rest around the flank and the infantry to close quarters and simply attack with whichever units are presented the Chinese rear.

We called it at this point, my cavalry had managed to not only charge home against Matt's infantry but won most of the melee rounds causing Matt's position to become impossible to hold.
Posted by Ian at 15:21 3 comments: