I actually finished these with the Prussians but I had started them about 3-4 years ago so way too long in the finishing. 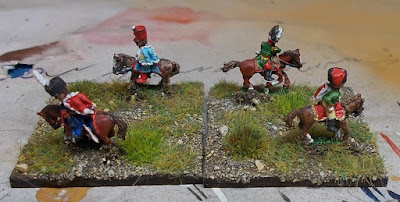 The main reason for the slow pace has been the lack of real need for these guys. I simply have so many I have as many as I would require in any game we have played so far but if we ever get round to playing a really big battle I may still need more so I may need them one day.

All told this gives me another four command bases for Division or lower commands using our rules. Of course if I use another rule set I may need even more command bases or need messenger stands. 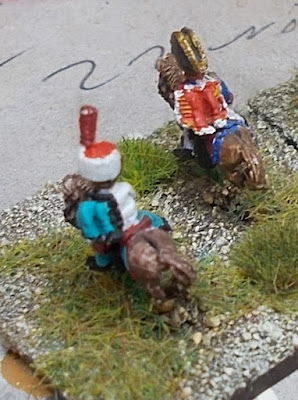 As you would expect from Adler these have so much detail that you feel you need to keep going. Better detail than some 10mm castings. It really has taken too long to finish these and the fact I still have so many more unpainted makes me smile. Many of my extra command will find their way onto infantry bases whilst I will continue to add to me command bases as well.

I actually have a sizeable amount of Adler French castings I bought via Dave D at the first Blog Con and far more Baccus that still need to be painted. My plan is to paint up some of the French Baccus infantry and get them sold on as I can't see me needing THAT much more French infantry given the quantity Lee also owns not that it will stop me painting up some for myself at the same time.
Posted by Ian at 15:47 4 comments: 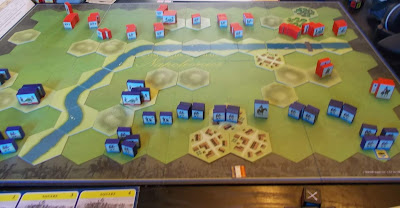 So working for one of the unnecessary retailers I have been sent home to cool my jets for the next few months. Yes you read that right, this is not going to be a three weeks and back kind of things. I am confident that it will be at least two to three months before we can expect to be making our way back to work. This of course will allow for some things to be better. Today was the first day that I was free from going to work (close down stuff) so it has been marked by the first of what I hope will be many games with Joseph of Command & Colors Napoleonic. We also have ASL to play as he has played a couple of scenarios and last but not least I will be running a roleplaying campaign for the rest of the family as well as playing our huge collection of board games. So much welcome family time between the kids homework and my hobby and house duties.

So todays scenario was from the original release Salamanca (British attack on French Right) 22nd July 1812. The situation in the photo was taken about half way through the scenario with my only cavalry unit long since lost whilst Joseph's British cavalry has forced one regiment into square but he failed to cause casualties and my fire had reduced his two regiments of cavalry to the point of not being too much of a threat.

In the end I was able to destroy both regiments of his cavalry when he ran out of cards and then we fought over the building hex near the rived Pela-Garcia with me finally getting it back for good as the British losses brought him close to defeat. We always play that I need an extra banner to required.

In the end he just did not have the cards to co-ordinate his attack and I was able to pick off his regiments when he could not withdraw them behind his lines and took my 7th banner (he lost a leader when a unit was removed).

Given I have the first four expansions we are in place to play through quite a lot of scenarios, so we will play out the last two scenarios from the base set then back to the expansions that have for the most part had just a few games played from.
Posted by Ian at 15:31 No comments: 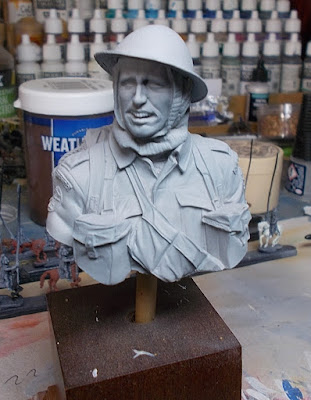 The next bust I plan to paint is British Commando WWII by Young Miniatures based in Korea. This is a far less complex figure than the Polish Lancer or even the German soldier I finished recently. I am trying a few different things, first I have high and low lighted the bust by spraying a light primer from above and darker primer from below though I think I really need to use stronger contrasting shades. 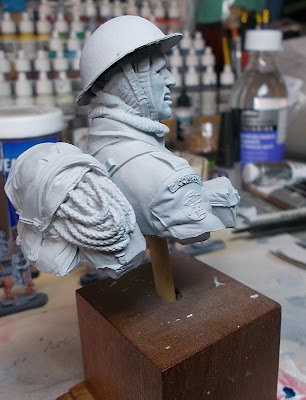 The other change is quite major, I will base cote it watered down acrylic and then over paint in oils attempting to a more subtle shading through blending. Being new to oils this is going to be interesting. I have already started work on a spare face and been reasonably happy with the result. This will be far more time consuming but I hope for far better results.
Posted by Ian at 15:47 No comments:

Anyone who has followed this blog over the years will have seen a few Prussian Battalions shown here. I am still working through all the regiments that did not fight at Waterloo but were involved in the 100 days campaign.

The 22nd Regiment was part of Pirch's 2nd Corps and whilst the rest of the 7th Brigade fought at Waterloo under the command of Brause the 22nd missed the action.

I continue to add flags to battalions that all most certainly did not have them but given I was well into the originals before I realised that why not continue. I still left the third battalion without even though it's not a fusilier battalion but that's me. 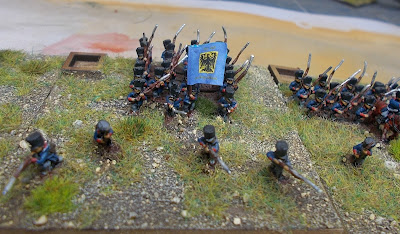 The standard depiction of our units of 4 skirmishers out front with 24 figures in the main body. These being Adler you get a little more Varity in poses. The skirmishes have three poses and the main body two or more versions to buy from.

One battalion I adopted a three deep line and two battalions have a mounted officer to add to the Varity. Basing is my normal outdoor paint (bitter chocolate tester from Homebase) with sand dribbled over, left to dry and surplus brushed off. I then drybrush a couple of lighter colours then add static grass and tufts.

I still have 44 more battalions to do so no where near finished, plus more artillery and cavalry but in far fewer quantity. Not that I own all the battalions required so I will paint up what I have before getting any more. This certainly moved onto a vanity project as I really do not need to paint up the rest and will never get them all on the table at the same time. I still also have plenty of French I really don't need as well as plenty of British to paint for my son.

The next up on the table will be two units of Companion cavalry I also don't really need :-)
Posted by Ian at 10:52 6 comments: