A couple of first's, first 75mm figure and first battalions for my 6mm French Napoleonic's for a couple of years. It was great to get back to painting some of my 6mm Napoleonic's especially as I was working on Old Guard in both scales. 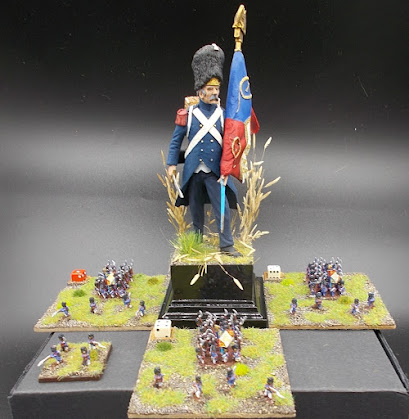 A bit of a difference in size, I have only a few French Guard units in 6mm, I don't even have a large number of castings in hand as Lee took care of most of them for our Waterloo game. I always planned to add them but in no real hurry so will be happy to get through more of the castings I own before buying more. 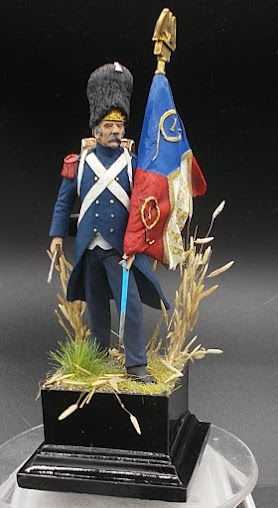 The 75mm figure (over 90 to top of his bearskin) is from mitchesmilitarymodels.co.uk and they do a fair range of 75mm and 200mm figures and also busts of which I have already bought two. I am very tempted by the Hougoumont dio set which I will probably get at some point. 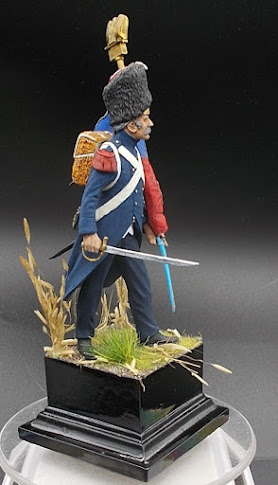 The kit is made of high quality resin and comes in about 15 parts, I had to paint them as parts rather than post assembly due to overlapping making it too difficult to paint made up. However the parts are really good fits and I have discovered Vallejo plastic putty which really helps seal gaps when putting together. 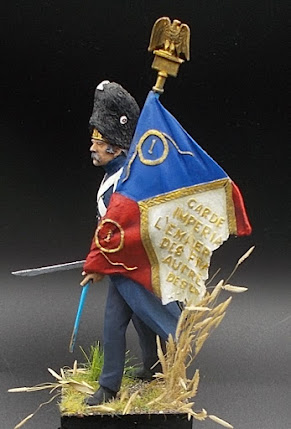 The figure is based on the final stages of the Battle of Waterloo where the Old Guard was under attack whilst the now defeated French army fell back in disorder with only the Prussians in pursuit. This is the first use of the Andrea white set, the effect I am pleased with for this old standard. The staff is also broken so I tried to represent this with rough painting of the staff. 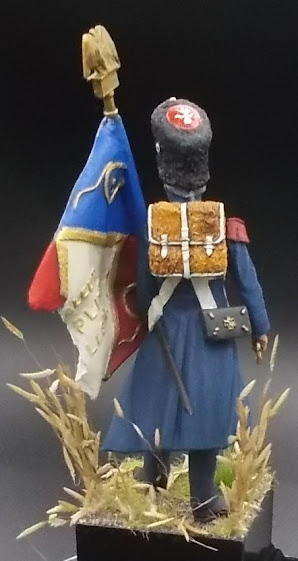 The backpack was mostly oils to get the mixed finish of cowhide but again the white set was used for the straps. 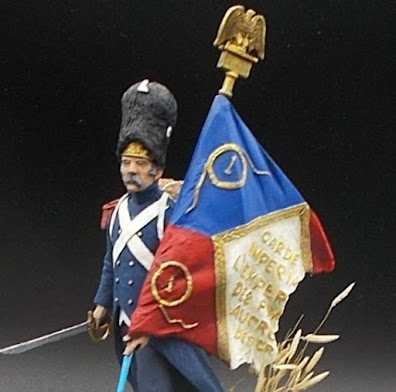 The greatcoat and trousers were Andrea blue set but I went a little darker base on the trousers being from different material and dies. The red on the standard is also Andrea (red set) and I really like working with them. The blue on the standard is a mix of Vallejo blues and came out how I wanted it to look. 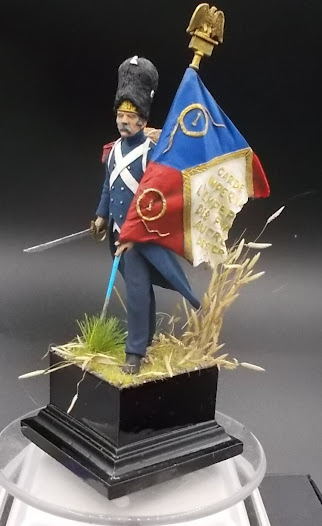 The base is from modeldisplayproducts.co.uk and was dispatched same day as I placed my order! I do like using this company as having met the owner at a show he comes across as a top guy.
The wheat is from an Italian supplier and has great prices, I literally bough a huge box of materials from them a couple of years ago but this is the first use of these. dioramapresepe.com is the company, has some great how to videos on his website.

Back to 6mm, these are Baccus as is most of my French army. Whilst we normally do not use skirmisher bases with our rules we found they would be useful when we did the attack on Hougoumont so now when I paint a few units up I will add skirmish bases to the pile. I made the mistake of doing four figures on this one, they should have three.

Don't really have much to say about them really, dice cells and bases from Warbases the bases being 60x60 but these are very old ones as they are pre laser cut era. Next up in 6mm will probably be some more Prussians. However I have finally got my figure mountain under 3000 figures!!

My first 1/35 scale diorama came together rather quickly in the end. As always with something like this I learnt quite a bit as I went on. 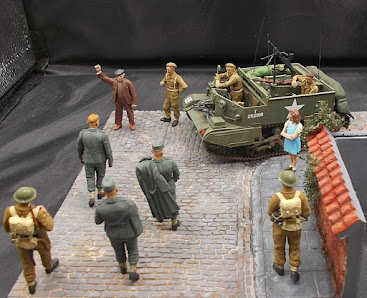 Tamiya Bren Carrier and two figures from the British Patrol set, the Germans are from Master Box German Captives 1944as is the girl, Civilians, Western region WWII era. The old French man comes from Mini Arts French Civilians 30-40s. The dead German is by Stalingrad Miniatures. The base and wall are two kits from Fields of Glory and are plaster of paris with the top of the wall made from resin. 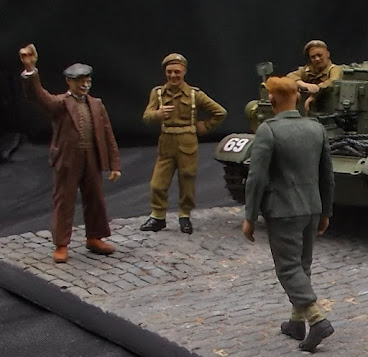 The figures are all plastic except the dead German which is resin. The old man's head is also resin. I have to improve my clean up, I found a few mould lines that should have been taken off appear once I had started to paint them! 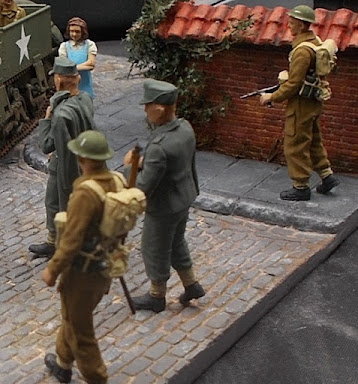 The base was a joy to work with, as was the wall, the texture and detail made the basic paint easy and once that and the dry brush work was in place I went to town with pigments and inks. Amazing the detail that can add. Next time I will take even more time over it and make it more suttle. 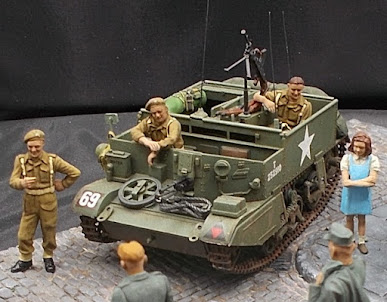 Tamiya have the deserved reputation of being easy kits to work with with clear instructions. For me the poses of the crew really made this kit work so well. It was the core of my dio idea and helped me build the story tremendously. 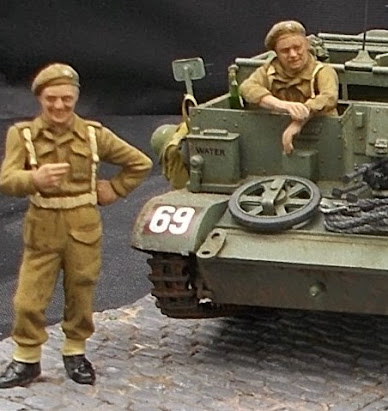 A cheeky pair, I built a gloss to the crews boots, the guys bringing in the prisoners don't, kind of subliminal detail. 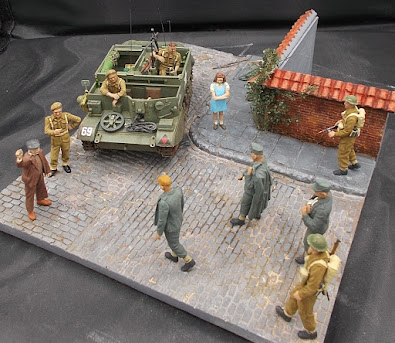 I messed around with positioning of the prisoners, Cath pointed out that they were too evenly spaced so I moved them off from each other and was happier with the final positions, Cath can be very direct with her criticism which I am always grateful of. 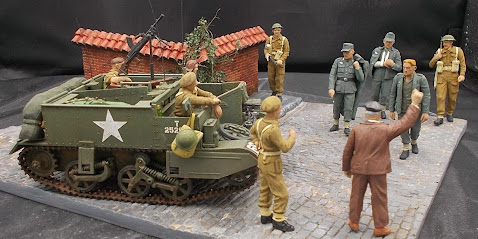 The German figures for me make this dio, lots of detail and interesting. 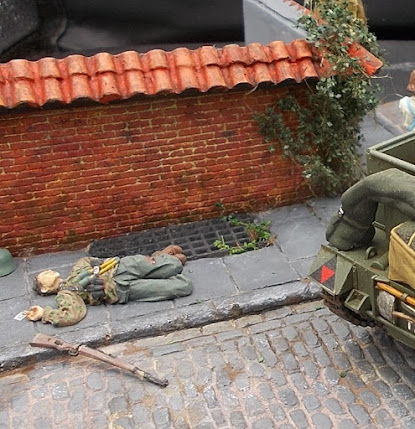 Never fully at ease with putting a dead man on the base I wanted to make it personal, next to his hand is a photo of his wife/girlfriend. Hopefully it will give people pause for thought if they were thinking good he's German. I added the girl mostly as she has a very stern look on her face. The idea that a dead man is just behind her but she is looking at the captured Germans so fiercely, went for lost youth kind of  feel. I also made her colourful to add another dimension. 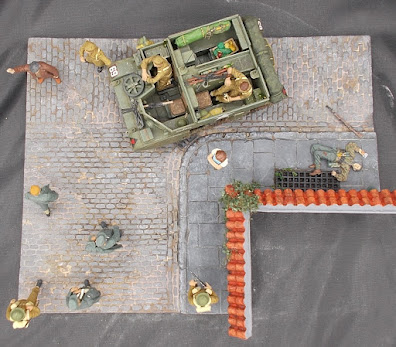 Overall I am very pleased, I have my next one mapped out in my mind, more rural but won't get started for a month or so as I have other work in the pipeline. This ones for sale for £85 but can only be hand delivered as too delicate to post. I can see this being sold at a show sometime.