Well it took some time but in the end I got there. I am basing my army mostly on the opening attack into Saxony at the start of the SYW. Even though I will be mostly fighting the Russians but hay we can't always be perfect. 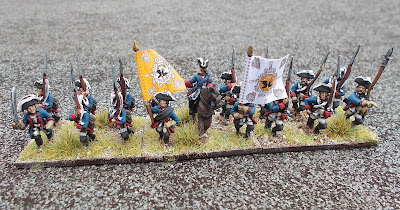 The figures are Old Glory, supplied by Timecast and the flags are Fighting Fifteens both I can heartily recommend. Old Glory figures needed a bit of a clean up and are very well detailed. The only issue with this is the amount of time it took to paint them due to the high level of detail. 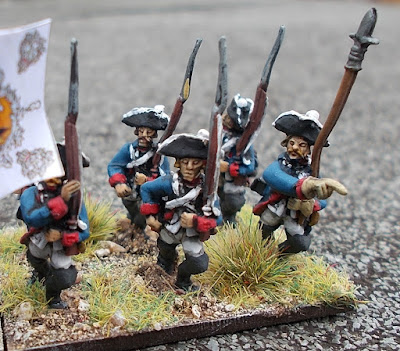 Lee and myself took a lot of time discussing the make up of units and base sizes each coming from a different angle before finally settling on 18 figures over three bases for infantry and 8 cavalry over two bases. Command have around three figures dependant on command level and guns on a single base with one gun representing a battery. 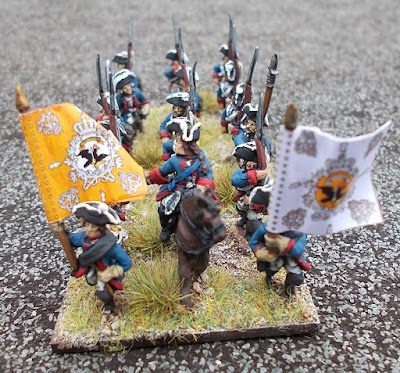 The colonels battalion gets two flags and is displayed here with the three bases in column. I went with a base coat of Dark Russian Blue followed by a highlight of Prussian Blue. One fully painted I inked with Nulin Oil and then highlighted again with the main colours to make them pop.

The second Battalion just gets the one standard, I have a flag for a third battalion but the regiment only had two during the Seven Years War. I may yet use it but for now it will remain a two battalion regiment. 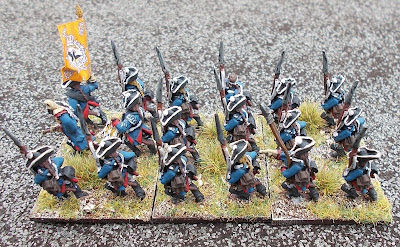 It was quite a slog painting up two battalions at the same time, I think I may take a leaf out of Lee's book and go one at a time in future. However I have bought a army pack from Lancashire Games and as they are not as detailed may keep to a larger number for these. My aim is to get enough painted up quick enough to actually get a few games in whilst the project is still new. 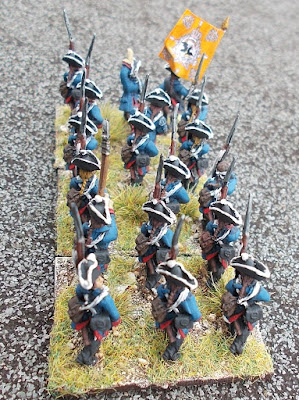 I do like the way they turned out and the rich colours of the flags really makes the units pop. Our first games will have to include unpainted mini's but at least some will come dressed for a fight.

Next up will be a couple of guns and a few casualty markers and then either a regiment of Hussars or a combined battalion of grenadiers, but before that I have the small matter of a couple of pike blocks to finish.