I have actually played three but only have the pictures from two of them. So just a quick run through based on a failing memory.... 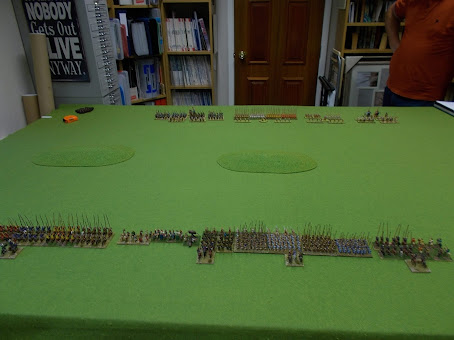 Another tilt against Matt, same armies but with a few more points. We did better with the rules but Matt continues to stink up the room with his dice rolls. 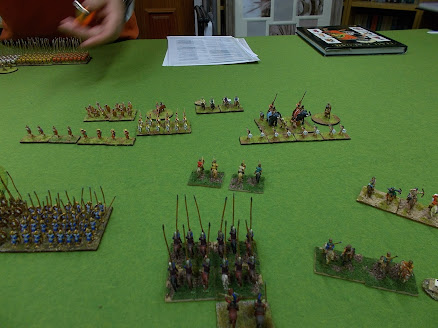 I on the other hand was rolling laver, this helped me with some questionable decisions but again the light troops seemed to do better against bigger units by disordering them on a number of occasions. 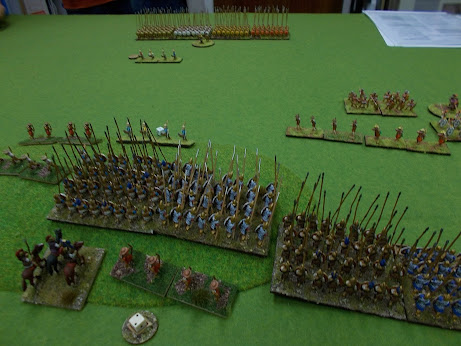 Matt was able to clear away my skirmish line but unable to do much else allowing them to go back in. 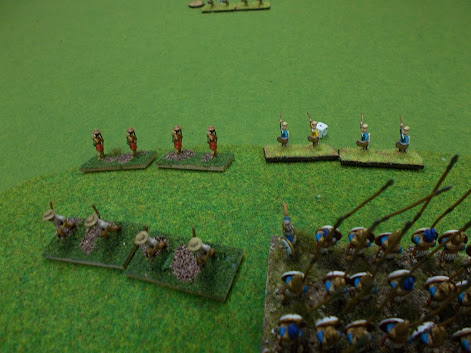 My guys on the left run from the Persian skirmishers whilst my Cretan's watch. Fortunately I was then able to clear his troops away and continue to march forward. 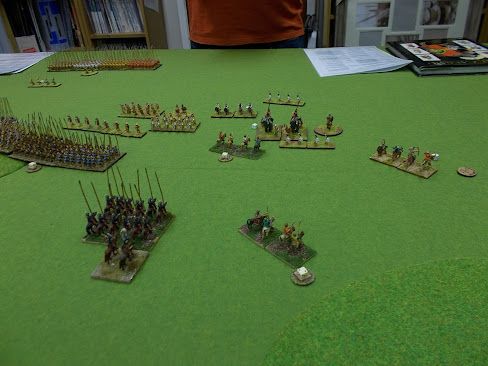 My skirmishers on the right were doing much better, though we were to more or less wear each other down over the following turns neither able to get an advantage. However Matt was also wearing my cavalry down as it was much weaker on this flank than on my left. 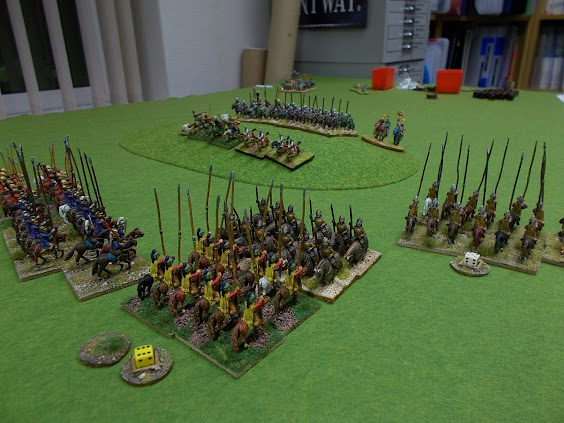 The main action was on my left with Matt sending in his Cataphracts against my Agema, I had managed through eye watering rolls seen off one regiment whilst I was certainly losing another but through epic rolls not quite breaking. 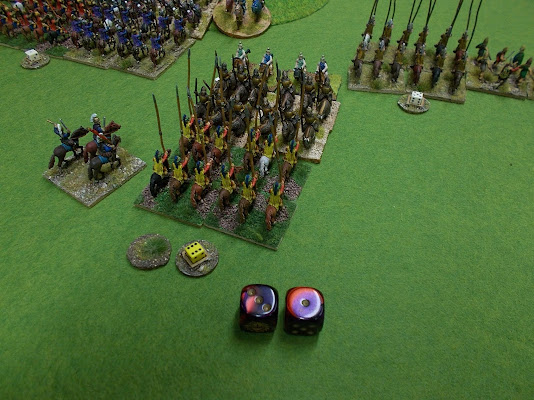 But all good things must end and ended with a rather poor roll. Matt's quality then started to take over and my left wing was crushed leaving the ever vulnerable infantry phalanx's at risk. I did have the pleasure of seeing a Gallic warband hit one Phalanx and whilst it just survived the first round was not going to stand beyond that.
Whilst we did not fight to a conclusion it was obvious the winner would be Matt. So after two games of Hail Caesar we will try Napoleonic 6mm with Matt trying the rules Lee and I worked on. Which is a nice link to....
Lee, my son Joseph and I have joined Chesterfield Open Gaming Society (COGS) which seems to be a retooled version of the club I used to go to in Chesterfield YMCA, certainly plenty of old faces there.
So this is our third visit and this time Lee played his Russians against James and me with the French. 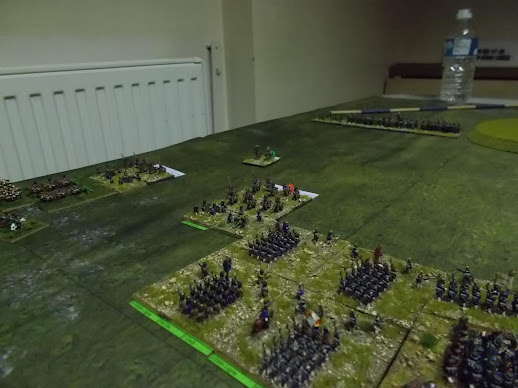 The issue was that I had left the rules at home and Lee had not taken a set away so we were without the rules and trying to work without the charts. We did fairly well but I was rather annoyed with myself. Still we had a good game. 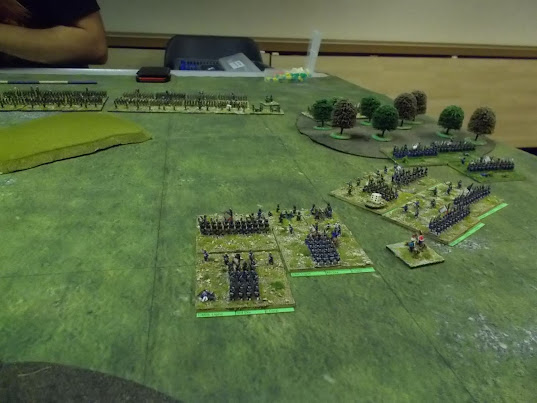 Joseph sent his cavalry against Lee's on the far left after Lee instigated the attack. His use of combined arms a timely reminder of how effective it is. Meanwhile on the right I was sending my light infantry through the woods after Lee had moved into it whilst keeping the rest of the Division back. 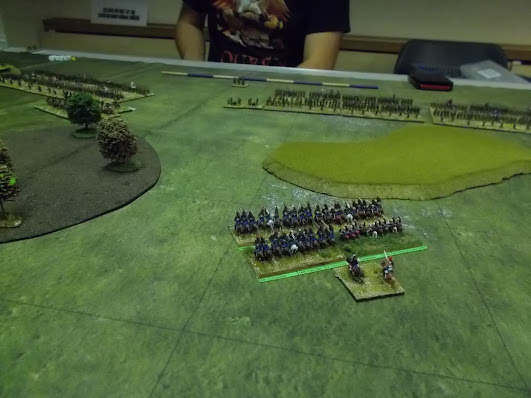 I had the heavy cavalry which I first moved towards the centre as Lee used his heavies to threaten Joseph's infantry with some success. Lee was to pull back when faced by my cavalry's move but we did not get chance to fight them as I had thrown them into his infantry. 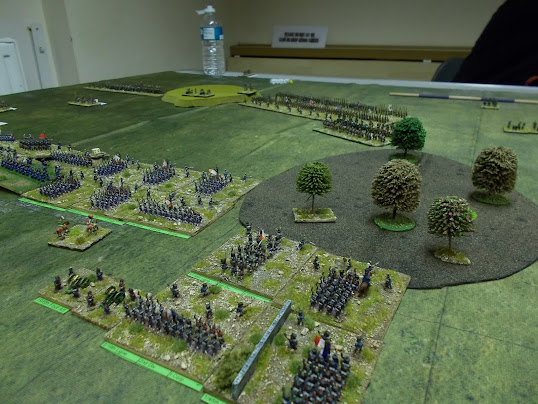 Joseph in the centre about to be charged by Lee's heavies, Joseph did not have light infantry so his movement into the woods was slow going. 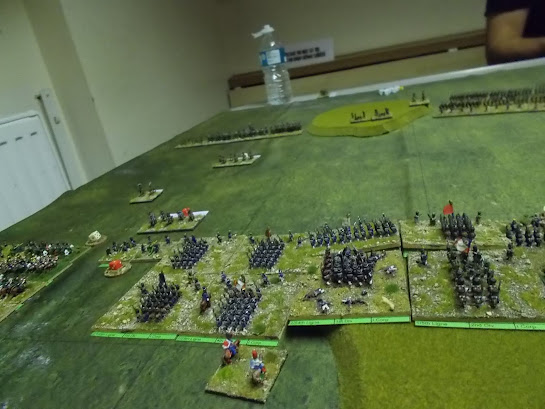 Lee's light cavalry had made a bit of a mess of Joseph's light cavalry and a foot battery but Joseph's response was to give him a taste of his own medicine. First defeating the weak Cossack division and then facing the better quality second line of cavalry. 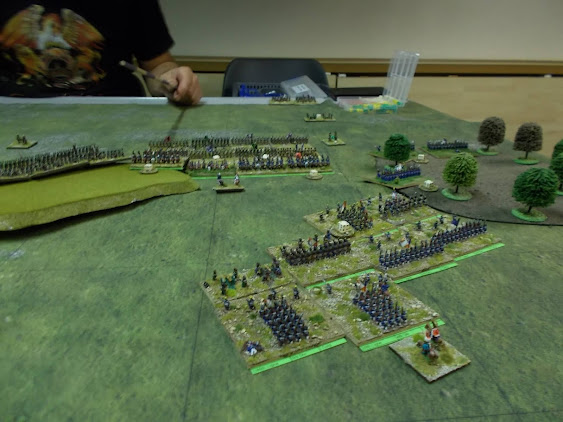 Lee had two divisions of infantry to my one (Joseph had two to Lee's one) but I had cleared the woods and was starting to reposition the infantry to make it hard for Lee to drive against me and for good measure had sent my heavy cavalry into his weakened division. I should have taken the option of falling back but having kept in contact with his squares I was being sucked into a lengthy combat. One I was sure to win but it would leave them vulnerable to Lee's still strong heavy cavalry. 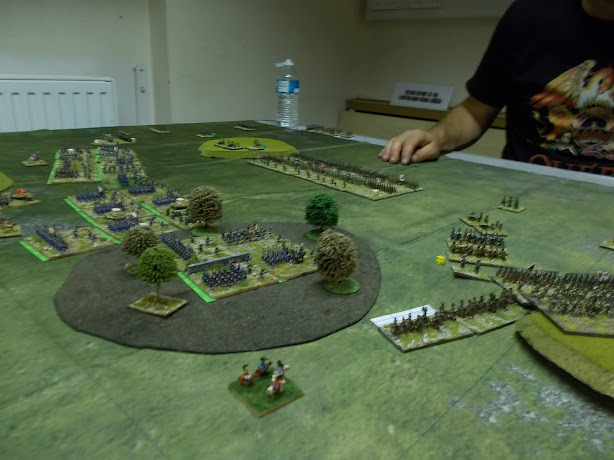 On the left Joseph was closing with Lee and able to either press the one Division of infantry with his one or threaten Lee's centre where he would then dilute Lee's strength of cavalry. By this point both Lee's and Joseph's light cavalry had reached their forced retire orders through mutual combats. Joseph effectively winning that battle as he had also dealt with Lee's Cossacks. 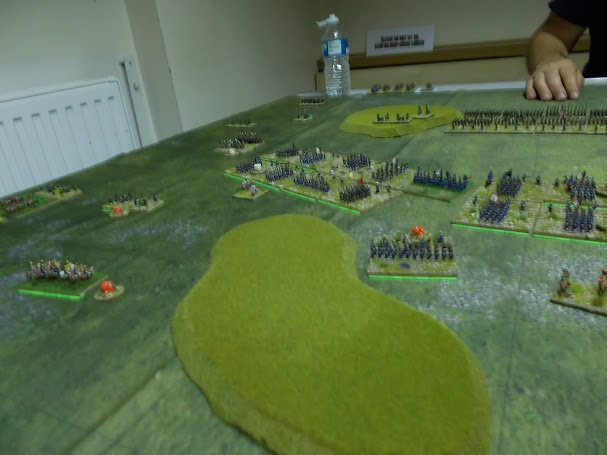 The shattered remains of Joseph's cavalry that was now limping off the field. This is the point we had to end but it still had plenty of play left with either side yet able to make a successful breakthrough. Still plenty of tweaking yet to happen but it felt like Napoleonic's and looked good too. We typically use these rules for BIG games and they work well with them. Club size games has been put under less stress. I think they will clear down to a nice set of rules.
We are back next Monday but changing to a Gunfight using Dead Man's Hand, that should give us a nice quick game or maybe two. Nice to get the opportunity to play again.
Posted by Ian at 20:26