OK so this was not based on any real action as sooooooo many games are not, but it was on Anne's table so thanks MUM. 44 years old and still nips over to Mum's to game, bless. Well given Barry lives across the road and we were using his figures it seemed the easiest option. Not sure the manufactures but these are all 1/72 (20mm) plastics (though the cart mounted Art was metal and for a guess Irregular Miniature). We diced for sides and I got the Romans which was interesting as I have never ever ever played with Romans before. The game just like the one two weeks before was just to try out the rules. This being Basic Impetus which Barry is keen on given that they suit small numbers of units and given the scale we will only use small numbers on such a table, though we could nip to the local games store and play on a huge table if wished as we will possibly do with the 15mm.

I personally had grave doubts about the rules though they read fairly well I know chunks of the good stuff were missing. Just like the game before we set at the same time paying no attention to the other players positions etc. Under the assumption that we would be over in a couple of hours we started later than normal but with about 3 hours play time, plenty. 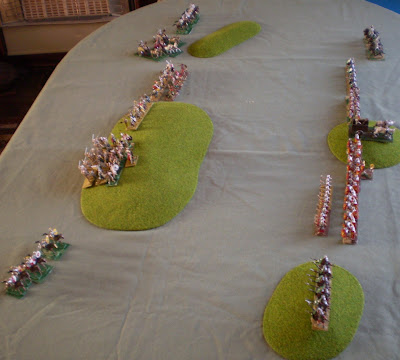 Barry set up his Gallic force up on the left my Romans on the right. More or less a straight up set up, Barry had Cav on both flanks whilst I only had the one Cav unit but I set up archers in front of a legion and ART on the hill. The warbands kept behind the crest fearing my mighty ART. As we were both more interested in trying the rules than winning the game we both were keen to come to grips in ways that under other circumstances we would not even think of. That said Barry managed to tempt my Cav out wide on my flank by offering a target that I had every right to expect a quick conclusion. This move indeed worked and sprung his three chariots to drive towards the infantry flank. I sent one of the two Auxilia to face these, OK they won't stand for ever but they should cause some damage, meanwhile I sent a Legion to play with a unit of skirmishers not even bothering to use the Pilum in first contact. The only other action at this stage was the other wing of Cav charging my other unit of Auxilia on my extreme left flank.

The only action that was conclusive first off was my Legion against the skirmish troops. I rolled oh so high and killed them all giving me first blood. This just exposed a war band with support which I received a charge from but this time I did use the Pilum and to some effect. This was an interesting combat as it swung back and forwards till........... 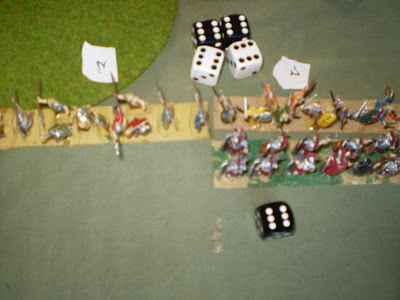 Not the way you want to roll, especially when they were rolling five dice to your seven! I passed the Cohesion test and as such managed to soldier on. At that point I had still to loose any loss whilst both warbands were down two levels. This scrap went on to the end with first one winning then the other, dice were fairly even once the disorders started to kick in but Barry struggled to do much in the way of casualties to me and they have lots of levels to resist damage.

This was the story through out the game, one side then the other seemed to get the upper hand. On my left the Auxilia had been disordered by the Cav but thanks in part to being uphill I continued to stave off being beaten and slowly the casualties rose. Barry decided after being pushed back twice for one last charge and the rolls went all my way and another unit routed from the field. This would allow this unit that was still in good condition to remove it's disorder then attack the flank of the double warband approaching my two Legion units still unblooded in the centre. The bow troops really to this point had done little as they could not fire into melee and I was not about to charge into a fight. The last skirmish unit approached them and I let them have a fairly unimpressive volley of arrows before they crashed into me guys. Well I won and caused a casualty forcing them to break off. Now I had a double warband to face. OK stand, fire and die or run away? Hell it's only plastic, fire away and ooch two damage, both are handed on to the back unit so no disorder or problems for the front guys, still every little helps for the Legions awaiting the main event. 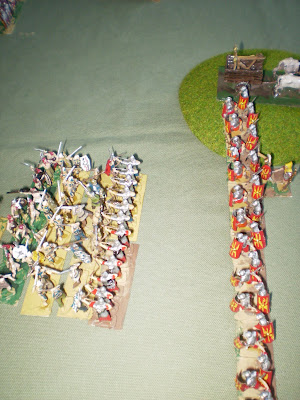 Oh the joy, these two warbands crash into my poor bow troops and what happens? just a disorder thanks to some epic die rolling by me and average by Barry. Now my boys would stand for another turn allowing my flank troops to recover and make preparations to go in on the flank. 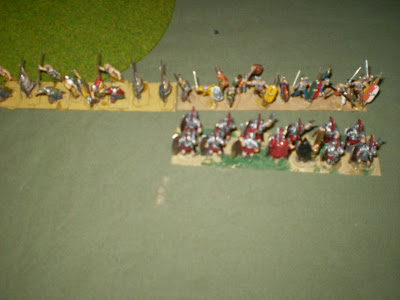 On their right I was still fighting off the `yes we can roll four sixes' and in fairness this was still any ones game. Both had survived another round of combat and both sides were becoming brittle, one more push could well have seen the winner though with the Chariot battle raging to the end how I would have reacted if I had won was up in the air but only bad things would have come from a Gallic win of this mini-fight. 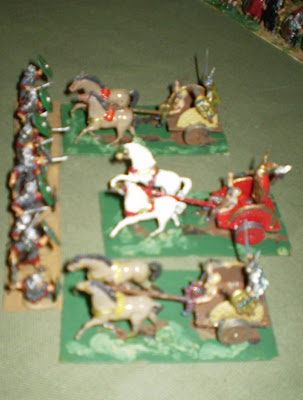 Those damned Chariots!!, they seem to me at least far far too powerful on paper. In the game they just could not get the job done. One unit of Auxilia held all three off for the whole game but only by dicing Barry turn after turn after... you get the idea. The only bonus I had was that after a couple of rounds I was never facing more than two a turn and towards the end his strength was falling and losing these Chariots would have been high point values and a major blow but I was not in best of shape. 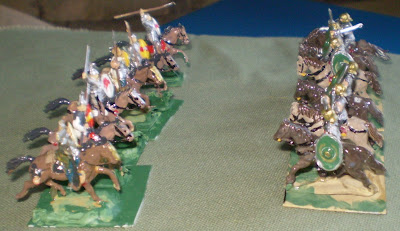 Well what should have been the easy battle (two or three dice advantage throughout) was at the start just a case of no result and then slowly gong my way before swinging to Barry right up to being down to one level left at game end. Still I had managed to halt, loose my disorder and was ready for that last charge, good rolls would win me the action but Barry pipping me with just a one 6 more than I had would kill my unit unless I rolled a 1 on the cohesion test. I would probably need two rounds to finish him off so odds were in favour of Barry in this one.

Well the kids needed collecting from school so we needed to call it at that point but it had been lots of fun and I can see that these rules work well for the limited number of units in play. The acid test was that I wanted to play to the end and I wanted to play another game soon. So we will try these rules again in the near future, however they are not without warts.

You don't shoot as your opponent charges in which is a big deal if they had the 2nd initiative in the last turn and first in the next. It seems not to pay any attention to armour or if you have shields or not. I don't like the idea of passing a cohesion test and because your disordered you lose a casualty anyway, why bother with the test for single casualties. It seems to be that if a unit lost three CP's if like I did it passes the CT then only a disorder happens? OK I had -3 o the test but the unit had 6 levels so still 50% chance to pass. Just quick fire problems that we can work out/through with more in depth play and maybe a house rule or two. Of course the real objective of these rules is to hook you to the main rules and get you to buy them. Barry is hooked but I already have the hook from Field of Glory and will be trying these out with the 15mm. Not sure I want to play both full sets for the two scales though taking a few bits from full Impetus and installing in the basic rules appeals. Once FoG has had a few games and we are happy (unhappy) with the rule set then I want to try out Impetus, that is unless FoG rocks, but does any rule set really tick all the boxes?