Polemos General de Division out for a test drive.

Having bought the rules and painted up enough French units to give my Prussians a game all progress with the Naps seemed to grind to a halt as I shifted focus to painting the 15mm. But with Barry building his Brits up it gave us enough of a push to get round to getting a game in. In fairness both of us have wanted to play but with both of us busy this last three weeks we have not had the chance.
At last we now had time, figures and rules, so what about venue? As we were both free in the day we decided to use one of the tables at a local shop. More on this in a future post once I get their permission to advertise the fact. What I will say though is that the tables are all set up and you have free use of any terrain you could wish for (though they have little in the way of 6mm they have plenty for 15+mm) this was not a problem as I had took plenty with me. All this for no charge, what a great service.

I had already had a short few turn primer play with both forces and this put me at a rather large advantage for the day. I had set the minimum number of units at 24 which I hit on the nail for the French and went over by about 6 for the Prussians. This just tells part of the story though as troop type, quality and number of formations can make the smaller force more powerful. I as the French had just three commands to the Prussian 4 which in real terms means the Prussian has a 1 pip advantage pre-roll (1D6) each Tempo round. Something that came into play later. Rather than plan out battle lines we each just placed as we felt fit and then looked at what the other guy was doing. After all this is supposed to be all about learning the rules as both of us had reservations regarding parts of the rules and another rather more experienced Naps player had played them once and threw his copy away, though he is prepared to try again. 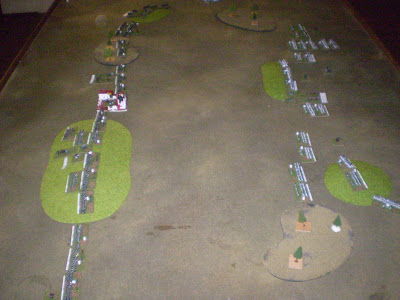 Ready to go, Prussians to the left are spread in an almost single line along the whole frontage whilst I was using the two woods at each end of the battlefield as flank protection and had units in reserve to counter any move around them. The rules will reward a reserve as they should and Barry did start to generate one as the game progressed.
The tricky bit (and bit I liked before the game and loved after) is the Tempo Points. Nothing moves without Tempo and you get a single point per sub-general + 1D6. Given that I had three and Barry four sub-generals this meant that D6 could really swing it and indeed it did. But it is how you deal with the swing that makes the difference. Once you have your Tempo you then bid some of them for the honour of moving first. Early rounds mean nothing but later on you may really want to go first, especially if you went last on the previous turn. Who ever had the first move the previous turn wins a tie so once Barry had the initiative he sat effectively on a two point cushion. But on the other hand Barry had spread so wide that he was forced to pay double Tempo to order his flanks. Not an issue early on but as the battle developed he had to choose which flank to leave hanging. The great thing is early on you seem to have plenty to go round but once the battle fragments suddenly you just never have enough. This will reward the player who keeps a reserve of fully formed units and the player who will take the time to re-form groups of units back into linked units (groups of three are most economical). So with all set up in we dived. 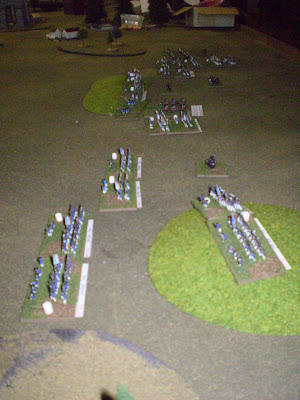 Due to setting up to far apart the early turns zipped by in a series of moves, this was good for two reasons, first it got us used to Tempo and the bidding (not to mention how each of us bid) but also allowed for us to make changes to plans etc. I was expecting the Prussians to come out and fight to use their greater numbers and when they were slow to do this I moved my left flank infantry off the hill to try and temp the Prussians down off theirs whilst moving my 4 regiments of Hussars from my right, across the front of my whole army to join the forces on my left. Meanwhile the extreme flank force was moved behind the wood to attack the Prussian right flank which was now using the same woods as myself to pin a flank.
The idea really was just to get Barry to weaken his forward force by forcing him to react to this force as all I had up front was a couple of raw Battalions. Due to the slow running of the game to this point though I decided it was worth closing especially as I had two more fresh units to take over once the fight had started and Barry just had these two units in position. On the other flank I had offered up a lone Battalion to the Prussian Ulans but Barry was at first refusing to engage then as the opposite flank was under attack he just did not have the Tempo to react. 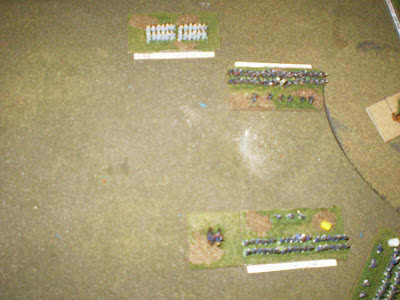 Mixed results on the first engagement. Barry closed to firing range as the second player then won Tempo and blastered off with his muskets. I had really made a mess trying to get Tempo and did not have the two required to attack anyway (I was out of command radius) so not only was I shaken by his first volley but unable to fire back!! Barry gets Initiative again and blasts away again but by now he no longer has the first shot bonus but scrapes a second shaken. I drop back and have his commander join them to steady them. Meanwhile I had failed to have any effect with musket fire back and so threw in a charge at my next opportunity routing his raw regiment and setting off in hot pursuit which had the effect of getting a very lonely Batt behind the Prussian line but not half as lonely as the now surrounded French Batt that had been successful to this point, now Barry was falling back with these guys as fast as possible, his flank was now turned. 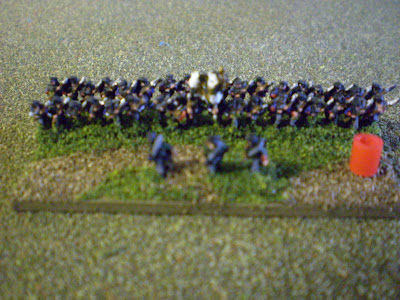 The price of failure, a Prussian Batt is routing away, routers never come back in these rules and with only two levels of shaken you need to consider pulling back units with one level if it's likely they will receive more levels in the coming rounds.
By this point I had by Cav in the middle and charged just one regiment, the idea being once it had been repulsed I could charge the same Batt with a fresh regiment breaking the first line up and follow up with the Infantry and by then recovered Cav. Well it did not go that way, the Infantry rolled badly in reaction to the charge becoming shaken. The shaken level made their fire ineffective (by the one pip for being shaken!!) allowing the charge to go in. The Inf Batt broke, routing through another Regiment causing this to become shaken but somehow my Cav did not pursue (rolled a 1). I still lost Inactive the following turn but with nothing but the shaken infantry able to fire Barry was not able to harm my Cav who then charged the shaken Inf Batt. 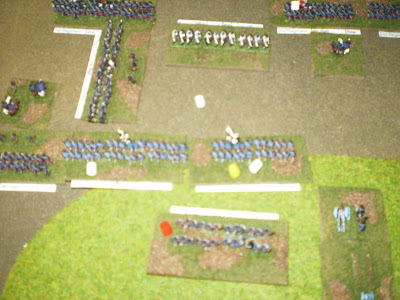 The Inf on the left turned to be able to fire on my Cav but my charge went home before they could fire hitting the shaken Batt and putting this unit to rout. I caught up with them and dispersed them on the field. The centre right of the Prussians was now looking a little ragered as I was still poised for more attacks. 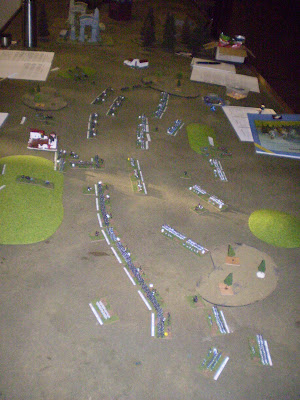 By no means was the game over, Barry had plenty of troops to plug the gap but he was outflanked on his right and his lack of a real reserve would effectively have caused him a few problems which was compounded by my being behind his right flank and able to reduce his ability for that wind to withdraw. In the picture above the one Regiment behind the long line is French, as is the units in small clusters. The long line is Prussian and is likely to be very badly mauled. We called it at that point as we had got what we needed from the game.

The rules seem to work right and gave a flavour of the game. I would say 24 units is about right for this part of the rule book but jumping to the larger battle rules seems to triple the required figures which is a big jump. I still have issues with the fact that units are on the rectangular strips and long to see French columns and would be happy to rebase all to the larger square bases and just allow lines on some columns on others, but that is for another day I guess. The rule concerns were for the most part smoothed out with play and we will certainly give them more goes and I think stick with them unless someone shows us something better. On the flip side of the coin the figures I have yet to paint most of the infantry will go on double bases as I feel I have enough infantry to fight under these rules but given Lee has a massive Allied Army I can see the need for some double bases added to the collection.

Next up Barry and I plan to try out his 20mm Roman V Dacian or Gaul using Impetus Light, stay tuned.