Down On The Farm 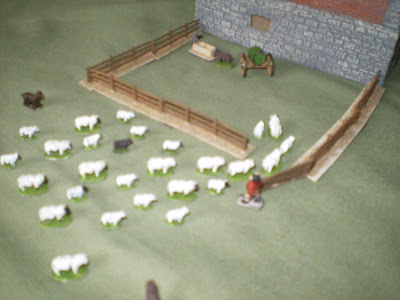 Had these sheep, goat and dogs for a very long time (as well as the cows and pigs still waiting) and after painting shall we say more challenging projects I decided to take it easy with these guys. Finished them about a week or so ago. They are for my ECW project, I thought at the time it would be funny to have them dotted around in the background, way back before it was the norm to have diorama style battlefields. The pic is not a great one (yes I have done the last lot can you tell?) but the sheep have more than a hint of yellow to their wool whilst the lamb's are a nice white.

Whilst on the subject of ECW, I am hopeful of getting a game using Forlorn Hope 2 in the coming month or two. Hope these are the answer to the rules search. I have a New Model Army fully done (though old and really needs fresh blood) and a Royalist Army still mustering. Matt has Parliament which I used to battle under Tercio Rules (5th edition?). I recently painted up a Regiment of Dragoons (see early post) and have one regiment of foot waiting painting, maybe get that on the table soon.

Talking of painting table. For a bit of a mix I have 12 Companions about a third of the way through being painted in 15mm and to keep with the cavalry theme have 8 regiments of 6mm French Napoleon's on the go. Six are Baccus and the other two are left over Irregular. Two of the Baccus are Hussar's whilst the rest are Dragoons. I still have four Irregular regiments of Cuirassiers waiting to paint with about the same of Baccus. No question that the Baccus have the better detail and look forward to posting pictures of the final comparison but at this point only the horses are painted so you will have to wait.

Waiting, that's a good one. Bought something else off e-bay the other day, but in this case it was for me. Two Heroic's and Ross wagons that I thought would add a little colour to the battlefield. Arrived two days ago and are sitting on the side of the painting table, these will fit into the que somewhere. As will the Reading haul. Lee is planning on dropping them off mid-next week so will wait happily for the chance to paw at this lot. Triples seems so far away.

Also waiting for Tuesday to turn up, I have a game planned with Barry, this time it's Romans V Dacian but we will be starting nice and early so will get the full game in. Well I say that but Monday I have my first Vivisection, supposed to be rather unpleasant which I do not understand as it's just Blood Donating without the biscuit.

But what I'm really waiting for (and very impatiently) is a trip to London on Saturday to meet up with a couple of ASL buddies, one I have met many many times but it's always a pleasure as he just radiates good will and fun, yep that's Dave. The other guy just happens to be an Australian not even visiting the UK, rather he is at a conference in Paris and is stopping buy for a chat!!! Never met the guy before but we have crossed swords on the battlefield so many times. Rob is an incredible bloke who I have EVER yet to hear moan about his dice, yep unbelievable!

And to think this post started with sheep.
Posted by Ian at 09:52