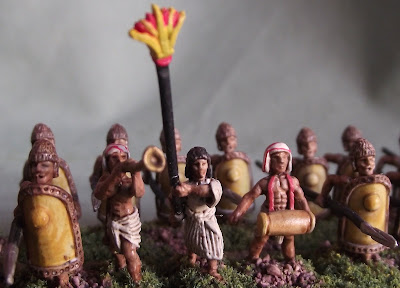 One of three command bases of this group of warbands.
Continuing with the project of changing over from WRG 6th to Field of Glory I de-based not only my Egyptian Hoplites but also the rest of my Persian Heavy Cav as well as the Saka Horse Archers. However running out of heavy duty glue as I finished off the Hops meant that further rebasing will have to wait till after getting more glue tomorrow. However I of course could finish off the basing of the Hops as the flock and basing compound use watered down PVA. As per other re-basing efforts it was linked with having other figures to base but more on them in the next post. FoG allow me just 6 bases of these guys so once I am set for rules I can see the rest being up for sale. I remember them being a joy to paint but then again it was not that long after I had painted up plenty of Greek Hops so maybe that was an influence.

Two more stands had been re-based to stand in for Greek Hop's under this list. I will need about double the number I own of Greeks to make max out on FoG. Under 6th these would either fight as two or three units, of course I could use them as a base for yet another army but I think not.

Same unit but from behind, I really like the skin tone and will look out for the paint colour at Tripples next year as it was one of the paints that did not survive the hiatus. I am fairly sure these figures are Chariot Miniatures, long time has passed so not 100% sure. Colour Party was the paints of choice for me way back then and I still have a few left in good enough order to still use.
Posted by Ian at 18:52