Diplomacy and having the last stab (I mean word) 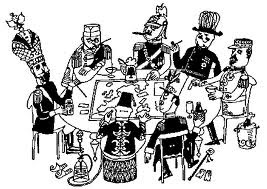 It's been so very long since I last played a game of Diplomacy but when I received Issue 3 of Fury of the Northmen as a sample issue about 6 weeks ago I was tempted to put my name down for the next game. Well a few e-mails later and there I am on the back cover of issue 4 with two other guys waiting for another 4 to sign up. This is a postal game in a real postal zine and we should have a turnround of 5-6 weeks or so. I will report on the game as it goes along right here but if anyone else is tempted to play drop me a line and I will supply the contact details of the editor Colin.

The zine itself is picking up momentum with more games now in play. We have the interesting looking Britannia which I am following from the point of view of seeing how it holds up as the game progresses. The first Diplomacy game is now just underway and the first two moves will be in the next issue. Being a double move you have to wonder how much the temptation to stab another player at the get go is? Chess is also played which will be fun to watch crawl along and again how well will this hold up?
Three games are listed waiting for players, these being Chess (needs 2) Diplomacy (needs 4 more) and Risk (needing 5 more to fill it up).

Anyone who has fond memories of the old Dip zines and wants to rekindle that era just needs to tag along for the ride.
Posted by Ian at 12:13

Email ThisBlogThis!Share to TwitterShare to FacebookShare to Pinterest
Labels: Diplomacy, Fury of the Northmen