Nearly two weeks ago a friend and I were chatting on skype. He asked my advice about painting up some miniatures for his Mansions of Madness game. After a fairly brief chat where I worked out he did not have any paints or brushes etc. I offered to paint them for him. With rather a great deal of haste they were posted out to me. I think perhaps he thought I might come to me senses. This by the way is the same kind guy who allowed me and the family to squat at his house in the Summer so obviously I was keen to do something in return.

I have painted two up a day and sending e-mails of the figures for inspection. My friends daughter made my day with the comment Awesome. OK kids are easily pleased but still it was great to receive it. Above is the last four I did but were in many ways the least challenging. 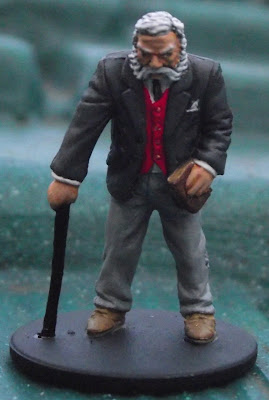 Originally this figure had much grayer hair and beard but I was requested to go more for white than grey. No matter a few more years added to the fellow. I thought any old bloke with the guts to go up against all sorts of Mythos would be a bit extrovert so kitted him out in a red waste-coat. 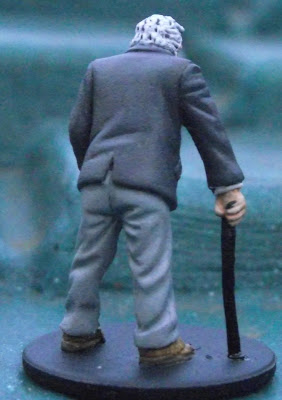 I enjoyed the old school shading done on these figures rather than the dip method. I was most pleased with the grey's coming through. OK not really the hardest colour to shade but I am if nothing else easy to please. 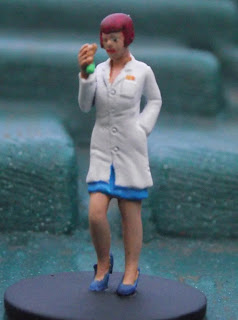 Another fairly undemanding figure. I used three different white paints to save me from trying to shade from one colour. The hardest two things called for was the request to make her a redhead  and secondly to supply bright green goo for the test tube. 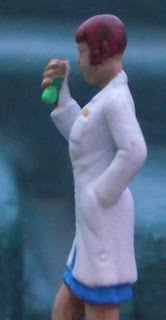 Cath helped me with both, first the hair via the suggestion to start with bright orange and mix in other colours from there. Second, Cath supplied the gel pen to apply the extra strong glow. I purposely only coloured in the bottom half so as to give it a little bit of life/menace. 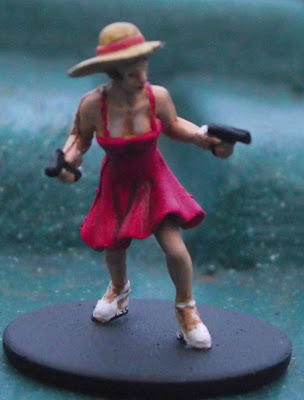 I was given full rein with this figure and it was fun. I over highlighted a couple of assets but did paint on knickers to balance my slate. In the flesh (cough) the dress is far more red than it appears. I was more than a little hacked off with the mold lines on this figure, only noticed once I started to paint it up. Seduced by other figures being very clean. 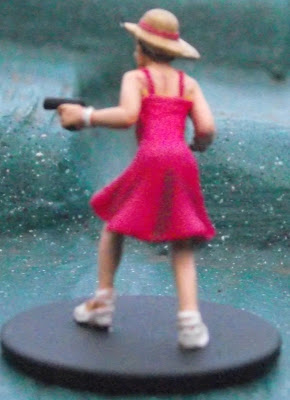 I'm not sure where she hides her guns when they are not clutched in her hands. Answers on a post card? Quite an easy figure to paint as the folds were very obvious so it was more or less paint by numbers. 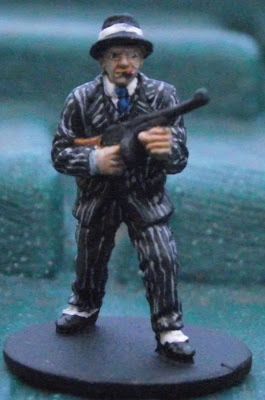 In a fit of enthusiasm I offered to do pinstripe. It's workman like at best, not helped by two other far superiour examples were not entered in the Challenge directly before this one. Don't get me wrong I am happy enough with it, I just wish I had the skills of some of the guys in the Challenge. But part of the challenge (for me) is to push yourself sometimes to do something you normally would steer away from. 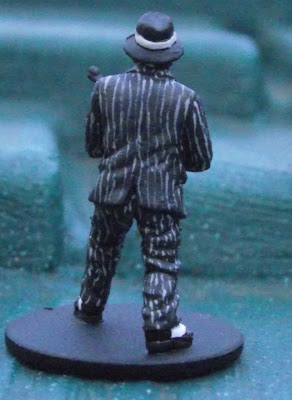 At least I did not make the mistake of trying to follow into the folds and back out again. It works well from the distance you should look at them and that's enough for me.

Whilst on the picture the coat and the nightgown look to be the same colour, under the naked eye they are a little different.

I am pleased to have done the eight figures and really hope they are liked when they arrive back in Somerset.  I have included a lot of small details I await to see if they are spotted. That was my fun game, little things and little minds spring to mind.