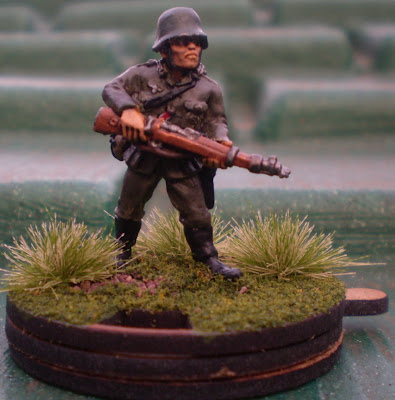 Just the one figure with this post. Another of the 28mm Sniper Reminders, this one is from Blacktree Design and is a rather nice sculp. I have received twelve Germans from them recently. Blacktree allow some figures to be bought as set packs but most of the Germans are from a group of about 24 figures. This should be great if you are wanting a mixed force, not so great if you want specific figures or you have a set time period you wish to model. For instance one of the figures has a Panzerfaust hanging from his shoulder. Well since these were first issued under combat trials in September 1943 this figure would be useless before this date. In fact many of the figures I received are really based on late war period. Don't get me wrong, these are useful for me but anyone wanting to depict early war may have to get in touch and request a more specific set of figures. 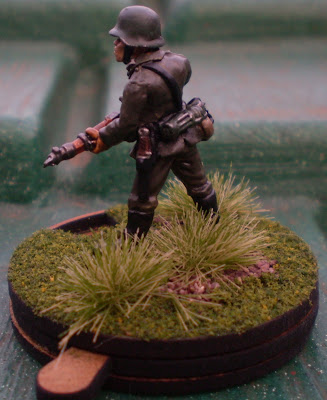 Most of the figures like this one has the later less distinctive leather harness that the iconic Y shaped set. Most of the figures also have a good mix of equipment such as gas mask container, water bottle, mess kit and often bayonet and or entrenching tool. 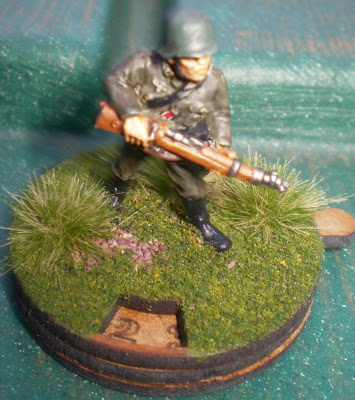 The shot with the flash brings out the colours a little more and shows off the Iron Cross ribbon I added for a little fun. Just like most of the other Blacktree castings I have found it easy to paint up and the detail is nice and most of it crisp. Posture of all the figures is better than the typical WWII Artizan figure in that they have better motion. Good Job I like them as I have a big pile of Blacktree figures to paint up.
Posted by Ian at 12:21