What I could not include in yesterdays post was that the MoM figures had company on the way to Somerset. My mate had lamented some time ago that he had not waited till I had done a Sniper Reminder in an urban setting and now had rather a lot of meadow grass based figures. Well from that moment I wanted to surprise him with a nice pair just because. I have took far to long over getting them from concept to finish. What speeded the whole process up was when I realised the stone wall Linka molds I was using to make pavements out of would if painted red make far better walls for 28mm figures than the actual 20mm brick molds. Not only that but I also had some stone sections left over from the pavement. 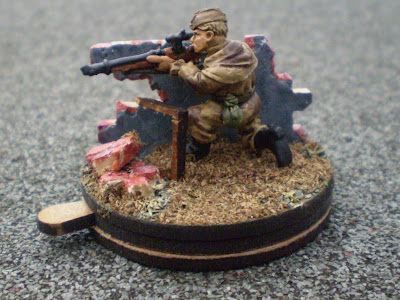 It's possible you may remember the Russian fellow above. I painted him up a few months back but was waiting for the custom bases from Warbases to arrive. At this point I was unsure I could fit much onto the standard casualty  base. I used a mix of railway ballast and brown flock for the general rubble. The bits of broken wood are windows again supplied by Warbases. 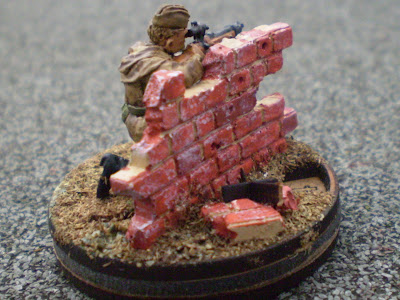 The wall bits were a lot of fun to play with once I got the colour right. Originally I tried to cut the plaster wall sections, this did supply lost of rubble but did nothing for my required walls. Then a sudden flash of inspiration and I started to use my pin vice drill to make holes along the cut line and far faster than I would have believed (but slower than ideal) I had wall sections that just needed the ridges shaving off with a craft knife. I even added bullet holes you may notice in the wall above. 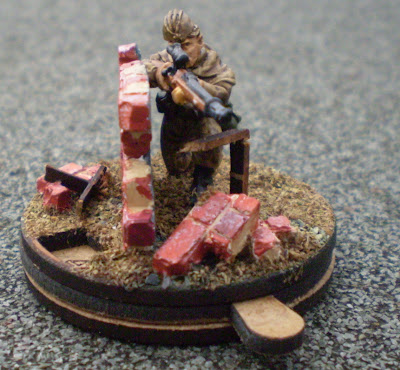 The painting of the walls was a bit drawn out but I found it better to fast damp brush through to dry brush and then with a very small brush paint back in the mortar in the areas it had been washed out. 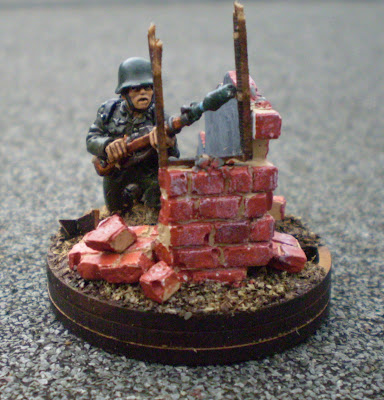 The German is a newly painted figure and I felt perfect for the urban setting. The rifle grenade came out well and the blue ring on the grenade is authentic. Both figures are Blacktree and I have rather a soft spot for them. I loved the window on this one but was worried it would not make the journey but the whole thing went inside a primer cans lid so that helped protect enough that it got all the way without damage. 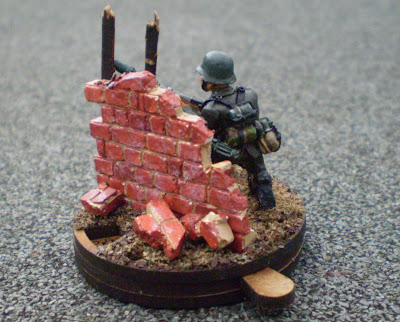 These figures have a wealth of detail, here you can see the water bottle, canteen and rolled up the camouflage cape. 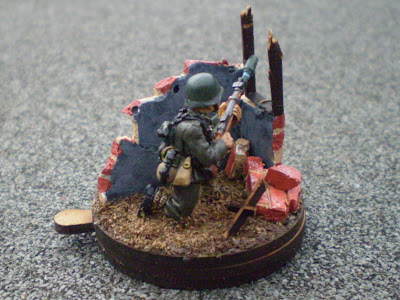 The interior of the wall was painted Dark Sea Green then brought up a few shades with dry and damp brushing. I got a rather disgusting grubby effect. You can just see a crack in the wall running behind his back. At the time I broke the piece of wall I was not impressed. Now it looks intentional and best of all from the other side it's tough to spot. Note the detail provided on the gaiters  that is a nice touch that is often missed by the sculptor. 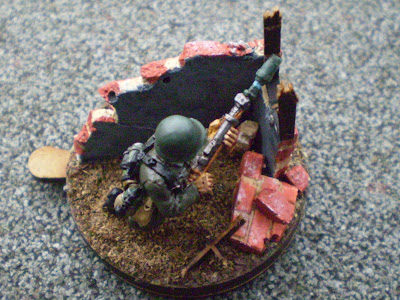 I was really happy with these and was a bit of a wrench to give them away. The e-mail I got after they were received though made it all well worthwhile. So with them passing all the tests I plan to do some more this year so watch this space as they say.
Posted by Ian at 19:05