OK hope you had fun, indeed I hope you digged it ;-) 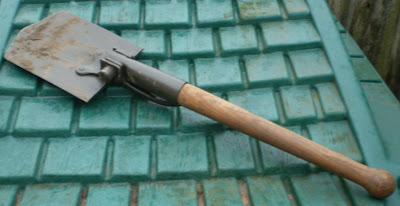 Here we have the little devil as a spade. A button just along side the bottom side of the spade part is spring loaded. Press this in and you can change the way the tool is set. This position is just a straight forward digging tool. Good for fast close to the ground shovel work or lopping off parts of an enemy in close quarters. The whole piece is nice and heavy, after all you would not want to snap it in two when you needed it most. 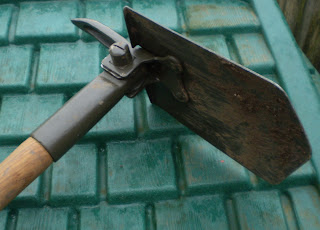 This is the pickaxe position. The button stands out clearly here. Great for heavy duty hard surface or frozen ground. Again it could be used in combat like this but having hefted it in all possible formats I think the first would be the best if your life depended on it. 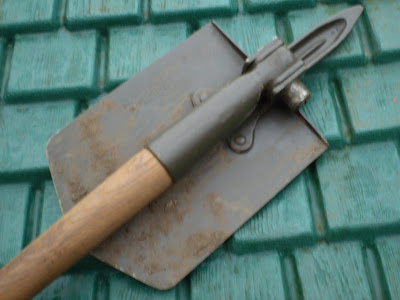 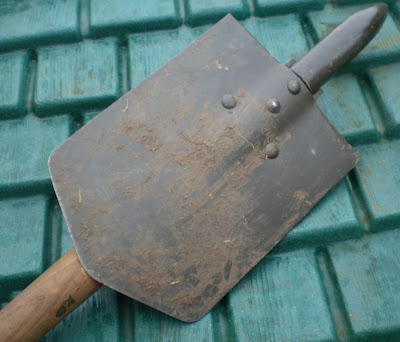 Set as the point and I think the least useful of all the settings. Better to have it at 90 degrees to the handle so you can get a good swing. It's also possible to have either the spike or the shovel at 90 degrees on it's own if desired. 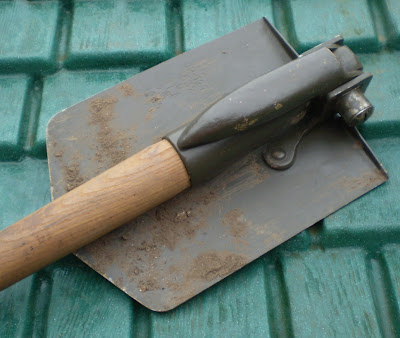 Don't worry I'm putting it away now. I actually bought this entrenching tool about three years ago and for style points made the purchase via company expenses as a snow shovel for the car. Actually I bought two, one for me and one for my boss. The need was real as modern cars tend to be pants in the smallest amount of snow. I picked these as you can actually drive over them to gain grip if required and they will be as good as then you put it under the tire!

Back with it's holder. Unfortunately it's not a WWII German entrenching tool but it is a West German Entrenching tool from the 1960's. This one is dated 1965 and is the real deal. I think each spade was £14, I have seen them on e-bay recently for £40+

I still tend to keep it in the car and have had to use it a few times, but most recently it was liberating the Chickens!!

Well done on all the guesses, it's been a fun diversion away from the figures.
Posted by Ian at 17:52